First steps are sensing the crisis in the first place and then figuring out what the exact crisis is. In this case it amounted to the following:

Once I put that all together I had to figure it out. I knew the flat writing could be fixed in the rewriting process and that some of the action, or lack thereof, in the first two chapters could be condensed and the meeting of the two romantic leads could be moved up sooner in the story. Easy-peasy.

The supporting character was a bigger dilemma. My resolution? Just ditch the story and start over. That didn't seem right since I've done that several times with other books resulting in a file drawer filled with unfinished manuscripts. I even considered giving up novel writing and going back to flash fiction and poetry, but that seemed a cop out since there is a little sign on my desk that yells "WRITE YOUR NOVEL IN 2016." And since in a few days I will be on retreat with my writing buddies I will have a good opportunity to fix all of this. Not to mention the fact that I have already written 200 pages of this story.

Discouraged and ready to give up I went to sleep. I woke up the next day at 5:00 am with a solution!!!

I would change the supporting character to someone else! She would be an adult so the issues with counseling a minor would be gone. She would have a darker story for my lead character to deal with--one that would help my MC discover that she needed to trust herself before she could trust men. This new supporting character would also provide stronger impetus for my MC to set about her goal of creating a safe haven for abused women in the rural town she's moved to which has no such place to women to go for shelter.

I've been using a process that combines some plotting/outlining strategies like figuring out inciting incidents and energetic markers (as per The Plot Whisperer), and listing scenes that have to be included later on in the book or the scenes that are coming in the next chapters I am writing. That incombination with a free flowing "pantser" act of writing my first draft in longhand in a spiral notebook. 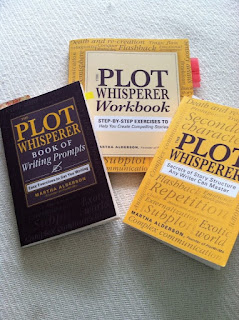 I think the crisis is averted for now. I'll let you know how it goes.